In june 2014 I started running because I had secured a speaker slot at the community day of Laracon EU. For my presentation I wanted to look fit on stage. To gain confidence I wanted to drop a few kilograms of weight. I started with a 9 km run and gradually ran further and further.

In august I had been able to run a 1/2 marathon in one hour and fifty minutes, a week before the conference. The conference happened and I was pretty happy with my performance on stage.

After that I kept running 1/2 marathons for training but I could only improve my time by 5 minutes. Every time I ran I was completely exhausted and my times weren’t improving. I bought a heart rate monitor on low energy bluetooth and found out I was running at max heart rate. This alarmed me.

In November I went to see physiologists in the university hospital. They tested my endurance by measuring oxygen intake, heart rate monitoring and taking blood samples.

Preparing for a marathon

After those tests I got a 16 week training shedule to lower my heart rate and got some nutrition tips. I also researched about exercises, training schedules, physiology and nutrition on the internet afterwards. And so I started to run 4 sessions a week. Next to running I started climbing again, one time a week, to build upper core muscles. If you would do cardio training only you would burn all your unused muscles and become a walking skeleton, but with strong legs.

When I saw good progress I decided to register for the Rotterdam Marathon. It’s a big event with good atmosphere and other runners seemded to love it. Rotterdam was a city I’ve never visited and it’s only 80 minutes driving by car. 16 weeks of training turned into 24 weeks of training, because I started training before I knew which marathon I would run and how many weeks I had left.

I kept running 4 sessions per week during the winter and only took a break for one week to go skiing. I ran multiple sessions of 2.5 hours and 3 hours, with a maximum of one long running session per week. My last training sessions showed me I was capable of running an average pace of sub 5:00 per kilometer for a duration of 3 hours. I was pretty confident I could run a marathon in 3 hours 30 minutes, or less than 3 hours 40 minutes if I wouldn’t be able to keep up the speed till the end.

April 12th, the day of the marathon came. My girlfriend and her younger sister joined me to Rotterdam. 40 minutes ahead of the race I was ready for departure in wave 1, block E. The sun was behind some tall buildings and the block was pretty crowded for the last 30 minutes before the race, so my muscles weren’t warm at all. I was also in a block of slower runners because 20 weeks ago, when I registered, I didn’t know I would be a 3:30:00 runner rather than a 4:00:00 runner.

The first 5 km were hard because my legs weren’t warmed up. I had to overtake lots of slower runners in order to not lose too much time. I was acidified after 2 kilometers and had to gently slow down for the next few kilometers to recover. After 10 km I was about 45 seconds behind schedule but I had completely recovered from the start and started to increase my pace again. I only noticed this when we passed the half way point but I had been running behind the same couple since the 10 km mark. They had the perfect pace for me! I planned to be about one or two minutes behind schedule at 21 km. I ended up being only 46 seconds behind schedule. I executed the first half according to plan because I kept calm.

Second half of the race

After the half way point the couple ahead of me started to increase their pace by 5-10 seconds per km, which was my game plan as well, so I kept chasing them. At the 30 km mark they slowed down for drinks, which they did every 5 km. I overtook them, thinking they would keep up with me, but I never saw them again. At 34 km at the side of the track people were handing out capsules of gel (high energy sweet sirup) which I ate together with a cup of water at 35 km. This way I was able to give my body some extra fuel for the last 7 km. The last 7 km I noticed a lot of people started to slow down, even walk. I managed to keep my pace till the very last kilometer, thanks to the Dutch crowd cheering. In the last 500 meters I gave it everything I had left. 3 hours, 29 minutes and 21 seconds after the start I ran across the finish line of my first marathon. 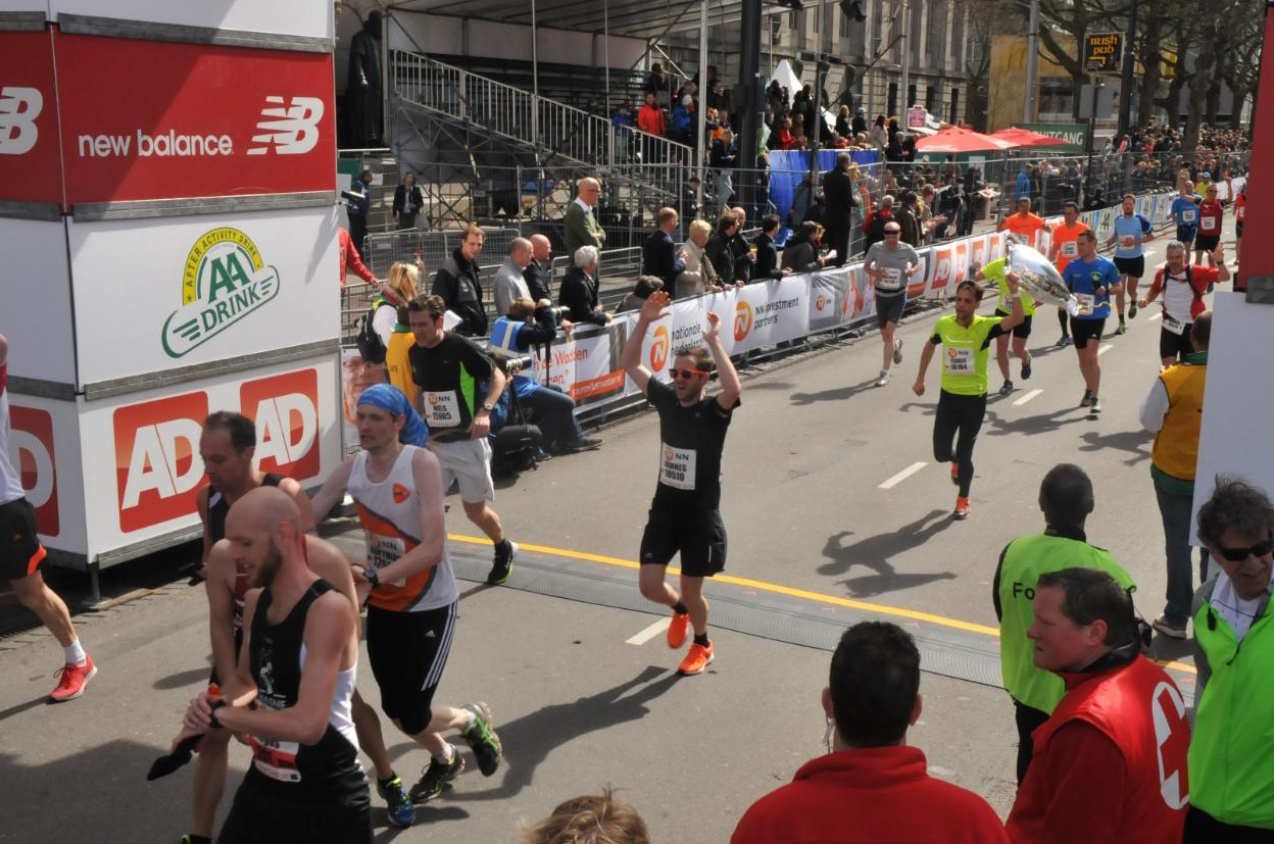 To my surprise I didn’t lose any time in the last 5 km. Probably this has something to do with all the measures I took in the last weeks before the race. No alcohol, no intensive workouts, but loads of carbs and water and a few good nights rest. And of course the gel containing high levels of glucose at about 34 kilometer.

Will I ever do this again? I think so. Will I ever beat my personal best? Maybe, because I don’t know if I was just lucky that everything went exactly right, or if I ran this great time just because of good training. I measured my heart rate throughout the race and noticed it’s higher than I would have hoped. I’ll be training on this in the future.

Thanks for all the wishes and cheers!

Working as a web developer. On his blog he writes about things he learned while experimenting with tools he might use to speed up his development.